What a whirlwind of a journey it has been so far!

We have been selling Mark's work as greeting cards and prints for about 10 years now, online via our own website and on our Etsy shop.  At events, such as street fairs, festivals and markets.  And for the last year we have had it in a few shops - The White Rabbit in Glastonbury, Nomads in Launceston and Blackfoot and Shaftesbury as sale or return (now moved over to wholesale).

We had been ticking along quite nicely, with a good following of regular customers who would seek us out at the events.  And for what started off as a little bit of cream on top of our "normal jobs" earnings.  But over the last year, we started to want a bit more, as we could see it is quite popular.

It was the White Rabbit in Glastonbury's shop owner who finally convinced us, we should up our game and go wholesale and attend a trade fair. So after going to the Spring fair for a bit of a reccie, we thought why not, lets do it!

This sounds easy enough, but it has meant we had to source a new printer, as before we were making the cards up ourselves, which wouldn't of been sustainable for wholesale.  We have had our ups and downs, with the first print run not being up to standard, the second run was much better.

So at the beginning of September, I went to the Autumn fair at the NEC, with the hope to come away with at least 5 retailers.  It was an experience, set up was a bit of a nightmare, I went about it all wrong and couldn't get my rows straight! Looking back I am kicking myself for the way I measured and have already decided I will do it completely different next time! 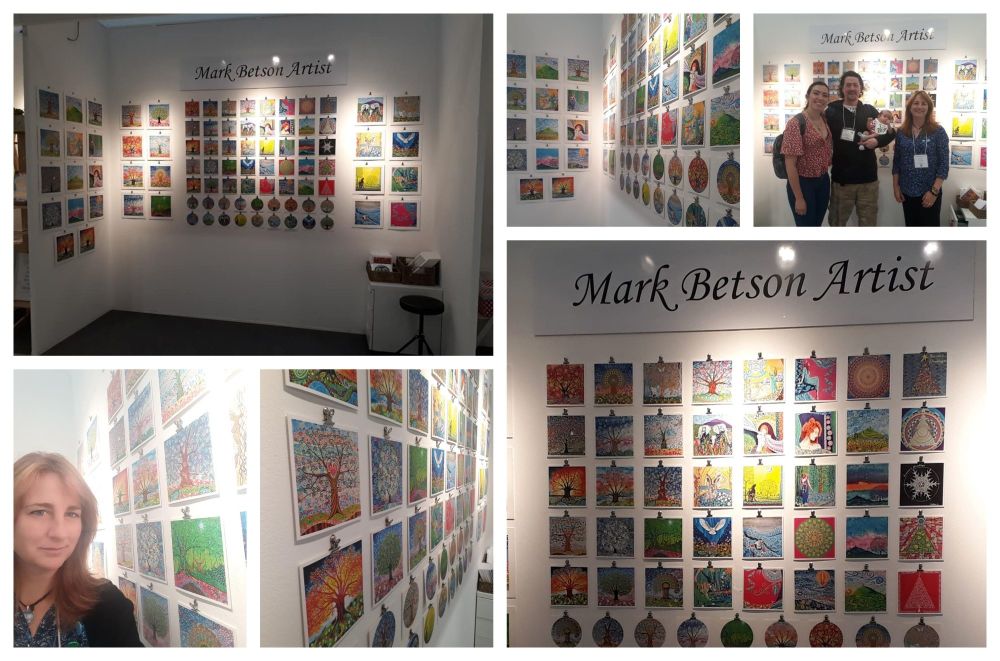 However, I didn't really need to worry, as the artwork did not let me down! It really does sell itself.

I was getting comments like "Oh I like this" "isn't it different?" "it's so colourful" "I really think we could sell this in our shop".

I was actually taken aback how quickly people made their mind up that they wanted to place an order!

So after being told by the show organisers and by other exhibitors "don't expect to take any orders at your first show, you will be lucky if you will get a few" (as apparently that is the norm).  Imagine our surprise when we finished the show with a total of 14 orders, plus a confirmation of an order, from a retailer I had previously met at an event in Sidmouth!

So as I write this, my printer is doing our biggest ever print run of cards and prints ready to go out on Thursday morning.

We don't intend to stop there.  We plan to spend the next year, allowing ourselves to grow organically, we dont plan to do another trade show until late next year. Instead I am going to be directly contacting retailers via email and post and we are also going to go on a bit of a road trip to personally visit a few.

So if you have stumbled upon our website and would be interested in stocking our products in your shop, fill in a request to trade form and I will get back to you as soon as possible.

Thank you for reading. Tammy